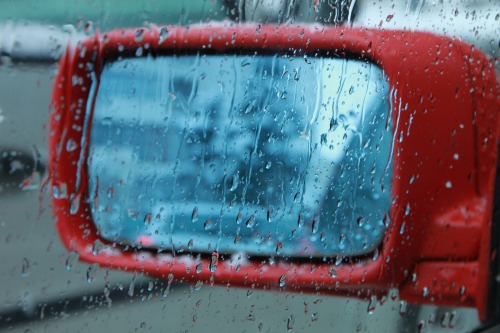 She normally loved a rainy day but she had been driving most of the day after driving all last night. The rain had been coming down in sheets and while it was tempting to stop she knew it was unwise. She was worn out, her eyelids were heavy and she really was in need of some sleep, but she only had a tiny head start so she couldn’t afford to lose any time.

The growing rumble from her belly reminded her that it had been even longer since she had eaten anything.  Oh well, she thought as she rolled down the driver’s side window part way.  She was hoping the cool air and splashing raindrops would wake her up a bit. She looked at the gas gauge and saw she was at less than a quarter tank so she would have to stop soon to fill up and while she was at it she’d at least grab a coffee.

She knew he was hot on her tail and his blood lust was all the fuel he needed.  There would be time enough for food and rest once she was clear of him.  He hadn’t always been this way…had he?, she pondered while subconsciously biting her fingernails. She remembered when they had first met, he was confident, charming and gorgeous.  She had felt lucky to even be on his radar, a pigeon to his peacock.  But had he always been this mean?

She really couldn’t answer that but it didn’t matter anymore.  She had thought of leaving before but this had been the last straw.  She had always stayed before, partly because she took the meaning of band of gold on her finger seriously but this certainly had to qualify as force majeure!

Now if she could just make it to the train station without him finding her she would be free.  She had a suitcase waiting in a rented locker there with a couple changes of clothes and the little bit of money she had squirreled away.  She knew she wouldn’t have much left over after buying a ticket but that was ok. Where ever she ended up she knew she would find a way to raise this precious life growing inside her far away from him.

Poetry and Stories by Mark Tulin

.... my journey to a healthy life, making new memories and so much more