I had to share this wonderful short story by Gigi.  She weaves such magical tales filled with love and hope.  Do visit her page to find more treasures. 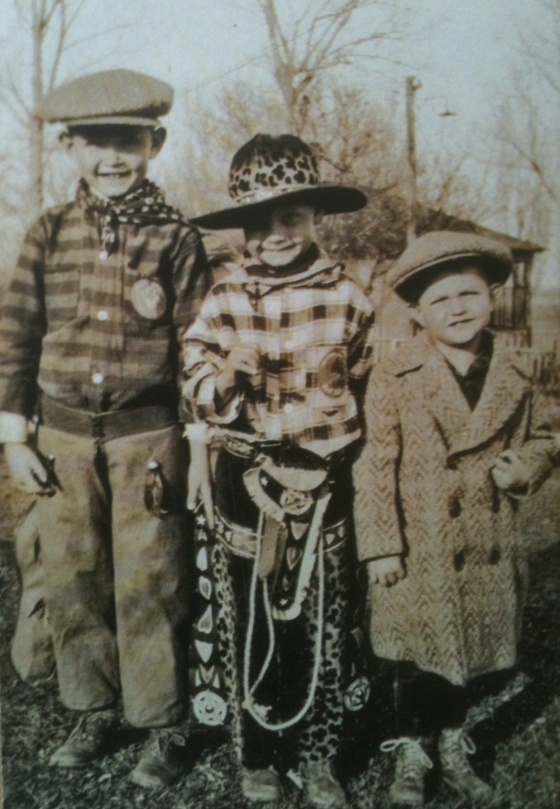 Everyone thought Billy, Bobby and Jimmy were brothers, I mean they did have the same last name, after all.  But the truth is, the boys were not related in any way.  Matt and Clarise Connely had Billy and then sort of picked up Bobby and Jimmy along the way.

They were living on Elm Street, in a sleepy sort of town, when Bobby started hanging around their house.  He and Billy became friends and what was once a, “would you like to stay for dinner,” invitation quickly turned in to an every night occurrence.  Bobby, it seemed, was afraid to go home. Clarise could see it on his face and in his manner.  One night, when everyone went into the living room, she asked him to stay the kitchen for a moment.  Clarise asked Bobby to sit down at the table, which he did rather reluctantly.   She gave him a plate of chocolate chip cookies, right out of the oven, so the chips were soft and stringy, just the way he liked them.

“Live here,” he answered in a rush, his eyes wide, chocolate smeared across his upper lip.  “Please.”

“I don’t know if your parents would like that,” said Clarise, leaning toward him, grabbing a cookie.

“Your father beats you?” asked Clarise, as calmly as she could, though her heart raced and her face felt flushed.

Bobby looked down, and nodded.

Bobby put his head down on the table and fell asleep instantly.

Clarise walked into the living room and said, “I want to move and not tell anyone where we are going.”

Matt said, “Okay,” since he knew his wife was never frivolous and assumed that she had a good reason for wanting to leave.

By the end of the month the family was gone and Bobby had a new last name.  Everyone was happy and none of their relatives asked any questions but simply accepted Bobby as one of them.

The same thing happened when they met Jimmy.  He was younger and had burn marks on his arms and scars on his back.  They moved again and things went quite smoothly, since they knew what they were doing this time.

The three brothers got along famously and their new neighbors said that they never met such lovely boys.  They were polite, well mannered and very helpful.  Mrs. Smith, a rather elderly woman, said that Bobby always helped her carry her groceries, if he saw her coming down the street.  She said that he had pulled some weeds from her flower bed without her ever saying a word.

Years went by, “too quickly”, laughed Clarise, and the boys became men.  I should say the brothers became men because they were brothers in every sense of the word.  They graduated from college and married.  Matt and Clarise became grandparents and their grandchildren were given their names.  The boys were loving and generous fathers and husbands.  They had learned the difference between love and hate at an early age and vowed never to be anything but kind.

Matt died in his sleep one night and everyone celebrated his life, with tears and stories about his twisted sense of humor and his inability to hammer a nail into anything, without bending it.  All of the children offered their home to Clarise, who gratefully declined, saying that she was happy where she was.

Everyone called her everyday, food was brought to her door, and she was invited for dinner four times a week.  She often refused but that never stopped her boys from asking again and again.

A small party was held in honor of Clarise’s eightieth birthday.  Bobby and Jimmy both stood in front of the guests, with tears running down their faces and told how their lives were saved by their wonderful parents, Matt and Clarise.  They asked those present to help children who are being tortured by their parents, so they can have safe and loving lives as well.  They waved Billy to the stage and he said that they were starting a home, called, Connely’s Safe Haven, for kids who had no where else to go and that was their gift to their mother on this special night.

Clarise was overwhelmed by the outpouring of love from her boys.  She kissed and hugged them.  She told them how they had given her so much joy and that she would steal them again and never look back.  They knew that she would and now they would do the same thing for kids who were being abused.

Clarise crossed over a few months later.  She had written a letter to each of the boys telling them that biology had nothing to do with parents and their children…it was all about love and nothing more.  They knew that to be true.

The Connely’s Safe Haven is a great success.  Matt and Clarise’s picture hangs in the hallway and everyone who enters the building and asks for help, eventually hears the story about how the boys became brothers.  Classes are given to anyone who wishes to attend.  Classes about kindness, about the role that men played in the lives of their loved ones and in society as a whole.  Classes about control, about violence.  Classes about being a father, a husband and a good person.  The classes are for boys and girls alike, because girls need to learn that they should not take abuse from anyone they know and that life doesn’t have to be that way.  Not everyone is helped because they stay at Connely’s, but the brothers never intended to help everyone.  Their goal is to help as many as they can and that is a goal they are meeting with flying colors.

Filed under People/Causes I believe In, reblog, Stories

4 responses to “The Connely boys…”