Hi All!  I know I have not been around…in fact, home for today only before going out of town again!

Do you know /follow Gigi of Rethinking Life also known as hitandrun1964??

If Not…Why? Rectify that immediately 😀

She was one of the first friends I made here on wordpress AND happily that has grown beyond the blogisphere.  Truly her talents and kindness never cease to amaze me.     AND she has just released her first novel Conversations with Death, now available on Amazon Kindle. 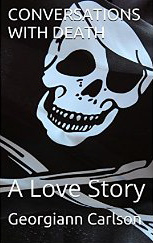 Death stopped by far too often, as far as I was concerned. I needed a way to deal with my rage. I was furious. So, I decided to hunt down and, if possible, kill Death.When I wrote the very first Conversation, I was ready for a fight. I never expected to write a second Conversation, let alone an entire book full of them. But something happened when I met and started talking to Death. Something that made me understand what Life and Death were all about. The Conversations went in a direction I never could have imagined.We all have our own truth and this is mine. Conversations with Death is a give and take between a living human and Death itself.

Conversations with Death on Amazon

So, go forth and support this wonderful writer!

10 responses to “Conversations with Death ~ a friend’s new book!!”